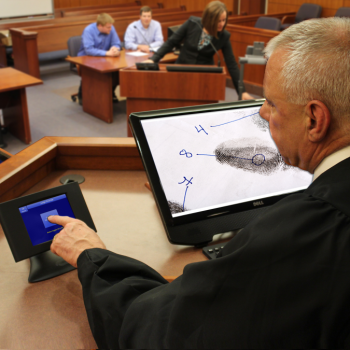 The days of attorneys relying on creating a mental picture solely with their oral arguments are long gone. It has become common knowledge that when it comes to juries, both comprehension and retention of information are dramatically increased when presented with a supporting visual and/or audio aid.

Putting a Spotlight on Evidence

For illustrating this point, let’s set the scene:

A trial is reaching a critical point – the prosecution requests to introduce a crucial piece of physical evidence. The exhibit has not been previously agreed upon during discovery. The admissibility of the exhibit must be argued by the defense. The judge needs the ability to keep the evidence off the screens seen by the jury until it is reviewed and deemed admissible.

The action of keeping the image off screen is commonly known as blanking.

While surprise evidence makes for exciting TV drama, rarely does that happen in real life. Due to pretrial discovery, where both sides’ attorneys agree on the evidence that’s going to be presented, they may not need to communicate with the judge about what to show—they just show it. (Each jurisdiction has its own set of rules, policies and procedures when it comes to evidence disclosure prior to trial.)

But if new evidence should be introduced, a judge has the ability to admit or deny physical or digital evidence into the trial proceedings. In order to admit evidence, a judge must decide on the relevance, the credibility and how persuasive the item is to help prove the case.

When the judge needs to review the evidence prior to it being displayed, she or he can blank it from the view of sensitive parties (jury, gallery, etc.) while keeping it available to the judge and the attorneys as they argue and decide upon the admissibility of the exhibit. This allows the judge maximum control of evidence presented in the courtroom.

The ability to selectively blank monitors saves not only time, but also dollars. If unapproved evidence would get displayed on a monitor for the entire courtroom to see, it could be the cause of a costly delay, extended courtroom time, jury time and staff work. Worse yet, it could result in a possible mistrial, which would prove to be a huge waste of effort, time and money.

Ways to Control Blanking in a Courtroom

There are numerous ways to set up the blanking feature in a courtroom. Whatever the vision the judge or courtroom AV professional has, there is a way to meet that vision. Here are a few of the more common methods:

Standard Judge Override – there is a single “kill switch” button on the judge’s control panel. The judge can immediately shut down a single monitor or a set of predetermined monitors. This switch typically blanks the jury, gallery and witness monitors simultaneously. Pressing the button again restores the image to all monitors.

Advanced Zone Control – this involves determining multiple zones that can be blanked and restored independently of one another. Each zone can be a single monitor or multiple monitors tied together for the purposes of blanking (See example 1 below). A single monitor can even be included in multiple zones to accommodate different situations (See example 2 below). This option provides for the most flexibility, so the judge can control evidence presentation exactly as she or he sees fit.

Judge Preview – some judges prefer to preview all evidence before it is openly shown in court. In this case, switching sources on the evidence presentation system would automatically blank the monitors for sensitive court participants (typically the witness, jury and gallery). Once the judge has deemed the exhibit admissible, she or he can selectively restore, or publish, individual monitors/zones or make the image live to the entire courtroom.

The Important Relationship between Trust and Control

A key factor in whether a courtroom AV solution will be trusted and used effectively is the judge’s ability to remain in control. Different configurations of the three evidence blanking techniques discussed above offer countless options to keep the judge in control of what is presented in her or his courtroom. When designing evidence presentation solutions, it is crucial to involve the judge in any conversation regarding how the presentation of evidence will be managed.

There is a wide variance in technology use among judges. Some judges want to have very little interaction with the technology and would rather hand that responsibility to a court clerk or bailiff. Other judges want full control over the evidence presentation technology and are willing to learn how to use more robust features that allow them to do so. No matter how involved a judge wants to be in the use of the technology, it is important their vision is met and that she or he feels in control of the courtroom at all times.

At Nomad, we have designed and installed hundreds of courtroom audio visual solutions. We have implemented many different blanking configurations to meet the specific requirements of the judges we work with. Contact Nomad now to discuss your courtroom AV system requirements. We’d love to talk about your project!